ME signs MOU with China’s largest machinery and electronics Chamber 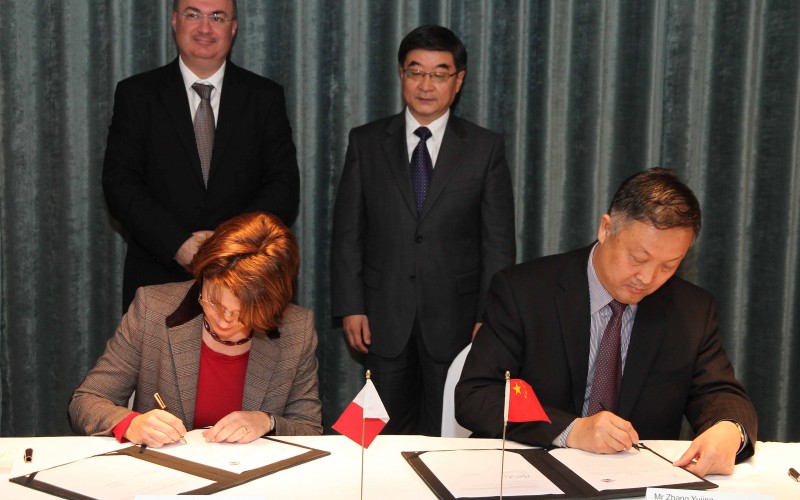 More than 25 entrepreneurs operating mainly within China's vast machinery and electronics sector visited Malta to learn more about the business environment and the opportunities the country offers particularly for those Chinese companies wishing to expand their business in the Euro-Med region.

The entrepreneurs formed part of a business delegation hosted by Malta Enterprise and which was organised with the support of the Ministry for Finance, the Economy and Investment, the Economic and Commercial Counsellor's Office within the Embassy of China in Malta and the China Chamber of Commerce for Import and Export of Machinery and Electronic Products (CCCME).

Malta Enterprise and the CCCME - which is the only nationwide Chamber of Commerce within the machinery and electronics sector in China and counts nearly 10,000 members - also signed a Memorandum of Understanding which outlines a number of initiatives that shall be taken in the coming months with the aim of strengthening bilateral trade, investment and commercial cooperation between Malta and China.

Amongst others, the two sides have agreed to share information on opportunities for the businesses they support, organise other similar delegations, as well as assist each other in carrying out marketresearch and in the organisation of business events.

Whilst welcoming the delegates to Malta, Malta Enterprise CEO Sue Vella gave a brief overview of the economic environment in Malta and highlighted the opportunities that Chinese companies could avail themselves of, including the possibility of using Malta as a regional hub to do business with otherneighbouring markets in the European Union and North Africa.

The Chinese Ambassador to Malta H.E. Cai Jinbiao commented on the excellent relations that Malta and China have developed over the years and referred to the initiatives being taken to strengthen these bilateral relations.

On his part, the President of the CCCME Zhang Yujing gave details of the Chamber's work to assist its members in developing their business, amongst others by tapping into foreign markets offering goodprospects for growth.

The Malta Chamber of Commerce, Enterprise and Industry Director General Kevin J. Borg also addressed the delegates participating in the business seminar, which was then followed by more than sixty one-to-one meetings between the Chinese delegates and representatives of local companies with whom possible business opportunities and cooperation were discussed.