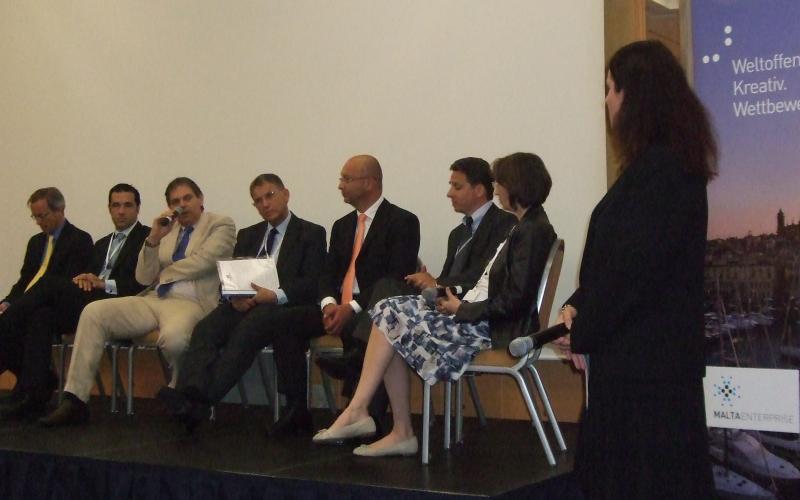 Ten local companies forming part of a business delegation organised by Malta Enterprise had a good number of meetings with their counterparts in the German cities of Cologne and Munich with a view towards exploring potential business opportunities.

The Maltese companies expressed their satisfaction with the high quality of the German companies which participated in the business forum that sought to promote Malta as the ideal trade and investment location as well as in the ensuing one-to-one meetings, through which the businesses from both companies established good business leads that they will now be following up.

The Ambassador for Malta in Germany Karl Xuereb welcomed the participants at both business fora, with representatives from Malta Enterprise and the Malta Chamber of Commerce, Enterprise and Industry then delving deeper into the specifics of Malta's business environment.

Amongst others, Malta Enterprise Chief Officer for Trade, Investment and Enterprise Support Joe Schembri spoke about the sectors which are flourishing in Malta. Such sectors also include industries in which the Maltese delegates operate, such as ICT and telecommunications, tourism and incentive travel, engineering and electronics, as well as food and beverages.

German companies, particularly those looking at possible expansions, were also keen to learn about the assistance that Malta Enterprise offers to encourage investment and facilitate businesses'consolidation and growth in Malta.

Likewise, three testimonials from German companies which operate successfully in Malta were also particularly interesting for the German participants at the fora, who thus learnt more about the business environment in Malta. A company operating in the engineering and electronics sector was presented in Cologne, while in Munich testimonials hailed from the tourism industry and ICT sector.

Further details were given by German consultants who made a comparative analysis between the tax system in Malta and Germany, highlighting the advantages for companies based in Malta.

Malta has a strong presence of German companies which have chosen to set up their operations in Malta and flourished in its business-friendly environment.

Additionally, in the past years Germany was the market towards which Maltese companies exported most goods, which amounted to more than €315 million in 2011. On its part, Malta imported €305.2 million worth of goods from Germany in 2011, an increase of €10 million over 2010.